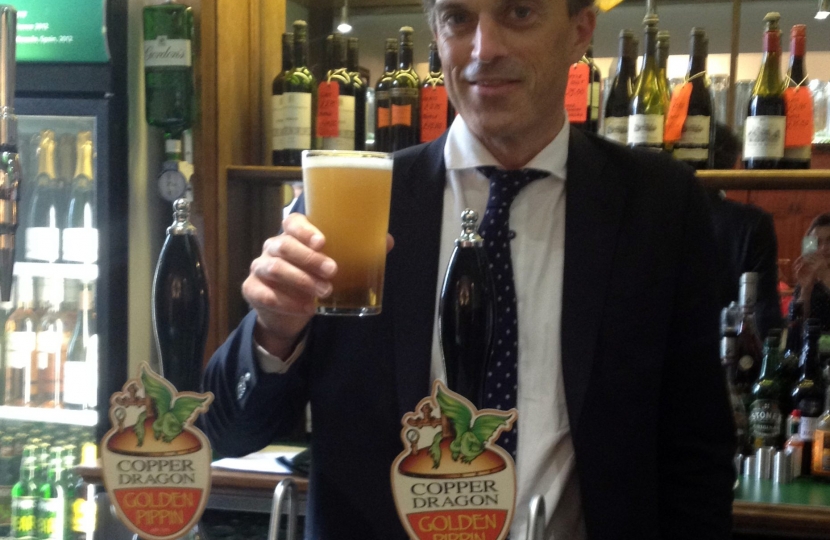 A beer produced by Skipton brewer Copper Dragon went on sale in a House of Commons bar last week.

Golden Pippin was on tap in the Strangers’ Bar after a request by Julian Smith, Member of Parliament for Skipton and Ripon.

Set up in 2002, Copper Dragon is Yorkshire’s fastest growing regional brewery and their Golden Pippin, a light refreshing blonde ale, is one of their most popular beers.

Julian, who helped serve a pint of the brewery’s drink in the bar last week and encouraged other MPs to sample the ale, said:

“Brewing is at the heart of my constituency so it seems only right to be able to showcase some of our excellent locally brewed ales in the House of Commons.

“Copper Dragon’s Golden Pippin went down well in Strangers’ Bar and asking for it to be served in Westminster is part of my efforts to support growing businesses like Copper Dragon who are hugely important to the economy of Skipton.”

“Golden Pippin is Copper Dragon's flagship ale and we were honoured to hear that it was being served on bar at the House of Commons. The fact that it's been so well received is testament to the skill of our brewers who've created a great Yorkshire ale with mass appeal.”