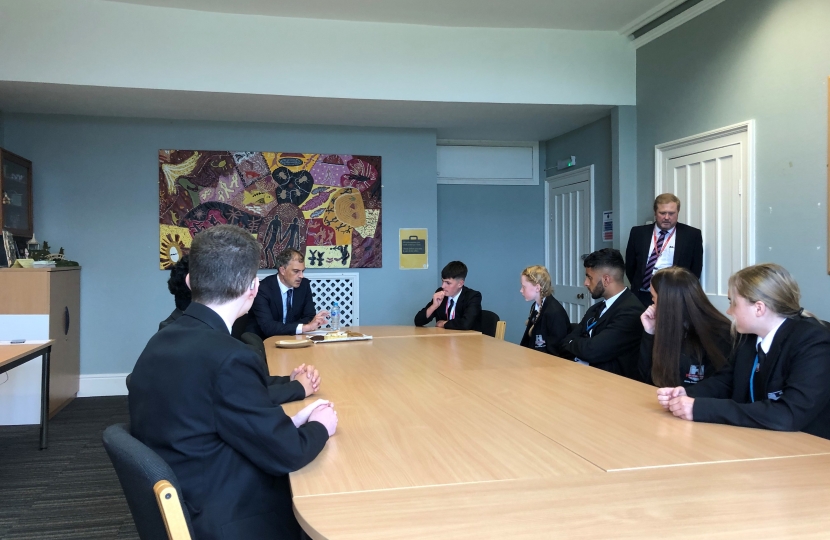 On 6 September, the House returned from the summer recess to vote on a number of Bills and address the most important issues facing the country.

Pupils also returned to school across Skipton and Ripon and Julian visited the Skipton Academy for their Grand Opening to celebrate the handover of the Academy's multi-million pound renovation and refurbishment project and cut the ribbon to officially open them. More recently, Julian spoke to Giggleswick Junior School during a question and answer session as part of their parliamentary engagement workshop. The pupils asked a number of interesting questions including why he wanted to become an MP, if he had ever met the Prime Minister and whether he enjoys the job. More schools have signed up to the online Parliament workshops in the coming months ahead.

Whilst in Skipton Julian met with Mike Hill, who runs Moorview Community Social Club, which hosts a number of events from quiz nights to live rugby. They discussed the impact of the pandemic, the renovations which have already taken place and his plans for the future of the club.

Julian spoke to Mike Lee, who was recently appointed the CEO of B4RN rural broadband, which provides high-speed broadband connectivity to many properties locally and elsewhere. So far, they have connected around 9,000 properties and Julian looks forward to seeing the rollout continue.

In Ripon, Julian met representatives from Bishop Sound, Lynch Filling Systems Ltd, Make it Shine Cleaning Services, Reet Yorkshire Food and TMR foods ltd at Juniper Grove Business Park. There are many innovative businesses based in Juniper Grove Business Park and Julian was pleased to hear that businesses such as Bishop Sound and Lynch Filling Systems Ltd are collaborating to share their knowledge and expertise.

Julian continues to engage very regularly with local officials and NHS professionals regarding the Coronavirus rates in the constituency.

Julian is very aware of the local concerns there have been about fuel available at petrol stations and he continues to monitor the situation locally and nationally very closely.

Over September, the efforts to restore television service have been closely followed after the fire at the Bilsdale transmitter on 10 August. Weather conditions have now caused a delay to the final installations needed to allow the temporary transmitter to broadcast. Consequently, it is now expected that the temporary transmitter will go live between 13 and 19 October rather than the initially expected 5 October. Once live, the transmitter will restore service to 90% of the households that have been impacted. Julian absolutely understands that this will be frustrating and disappointing news for many people, particularly the elderly, and continues to monitor developments.

Julian recently met with GPs including Dr Penny McEvoy at Ripon Spa Surgery where he was shown around the surgery and met with staff, the Practice Manager and a patient representative to discuss General Practice.