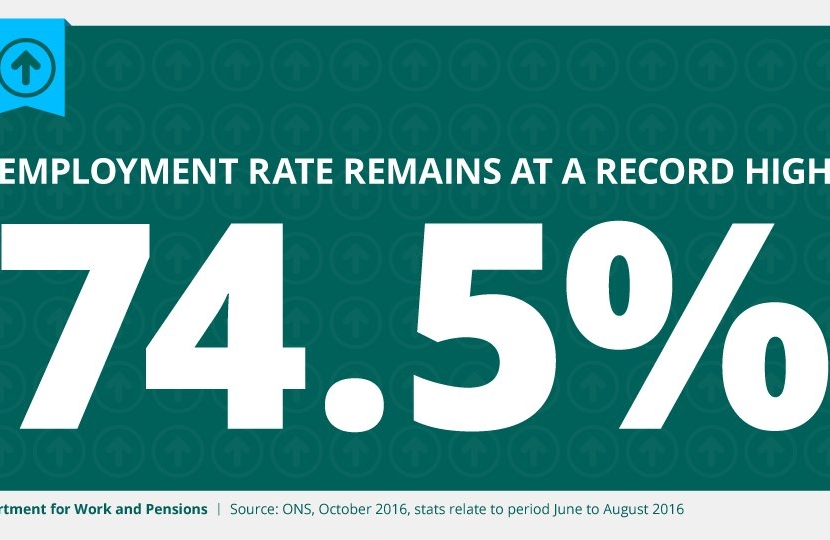 Julian Smith MP has welcomed the news that unemployment across the UK remains at the joint lowest rate for over a decade – down nearly 900,000 since 2010 – according to the latest set of labour market figures out today, with 188,000 more people back in work in Yorkshire and the Humber since 2010.

As well as unemployment continuing to run at a 10-year low, the number of women in work is at a record high of almost 15 million and youth unemployment is down 352,000 since 2010. There are 31.8 million people in work, up by 2.7 million since 2010 – that’s well over 1,000 jobs created on average every day – and average wages excluding bonuses grew by 2.6 per cent over the last year.

Julian Smith MP said: ‘Building an economy that works for everyone means making sure everyone can have the security of a regular income so they can provide for themselves and their family.

‘Today’s figures are good news for families in Skipton and Ripon and across the UK. Unemployment continues to run at its joint lowest rate for over a decade, there are 188,000 more people back in work in the region since 2010, and the number of people in our local area relying on the key out of work benefits has fallen by 552 – a 56% drop.

‘But there is more to do to help people of all backgrounds and abilities into work, which is why we will continue with our important reforms to welfare that are ensuring it always pays to be in work.

‘It’s because of the measures the Government has taken to put our economy in a position of strength that we can build a country that works for everyone – with more people sharing in our country’s prosperity.’