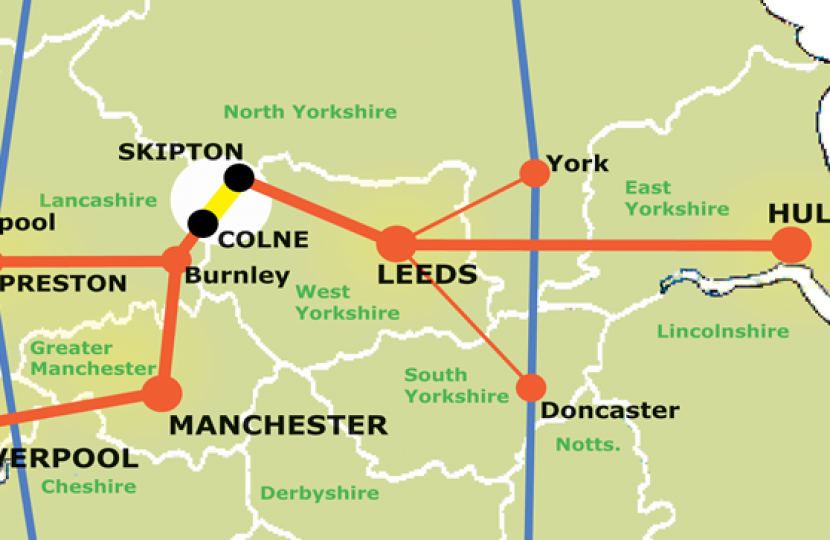 A new study into the potential reopening of a historic Lancashire to North Yorkshire rail line was announced today by Transport Secretary Chris Grayling.

The Transport Secretary announced the feasibility study into the value of reopening the Skipton to Colne railway on a visit to Colne Railway Station.

The 12-mile route, which last ran in 1970, could create a faster rail route across the Pennines and allow new passenger services between Lancashire, Skipton and Leeds, connecting towns on the route to new jobs and education opportunities.

"I am delighted with the Government's announcement of a feasibility study into the value of reopening the Skipton to Colne railway. I pay tribute to all the campaigners and I look forward to working with my colleague, Andrew Stephenson in helping to deliver the next stage of this railway line to the benefit of both our constituencies."

“We are carrying out the biggest investment in the North for a generation and are committed to improving rail links to boost the Northern Powerhouse.

“The historic line between Skipton and Colne could deliver a vital link across the Pennines to boost business and move goods between the east and west much more quickly.

“I want this study to look clearly at the business case and value that the line could provide.”

“We are delighted that the Department for Transport has committed to exploring the possibility of reopening the railway line between Skipton and Colne. We will now work with the Department, taking note of previous work undertaken, to produce a cost and economic benefit study for re-opening the line.

“In our recently published draft Strategic Transport Plan for the North, we identified the Central Pennines as one of seven Strategic Development Corridors vital to future economic growth in the North.

“This work could help to improve connectivity in the Central Pennines and a reopened rail link between Skipton and Colne could create a new, faster freight-route across the Pennines as well as benefiting passengers with new services between Lancashire, Skipton and Leeds.

“This supports our vision of a thriving North of England, where modern transport connections drive economic growth and support an excellent quality of life.”

The government has said it will explore opportunities to restore capacity lost under the Beeching and British Rail cuts of the 1960s and 1970s, but to be successful, schemes must unlock housing and growth, ease crowded routes, meet future demand and offer good value for money. It has set aside significant funding for the development of new railway schemes in the next railway funding period from 2019 to 2024.

In such a rural constituency as this, I have done all I can to support farmers and hill farming during what are challenging times.

Leading the efforts to bring the Tour de France to Yorkshire is just one example of work I have done over the past seven years to boost our economy so that businesses can grow and create jobs across the constituency. It is important these efforts continue in the months and years ahead.