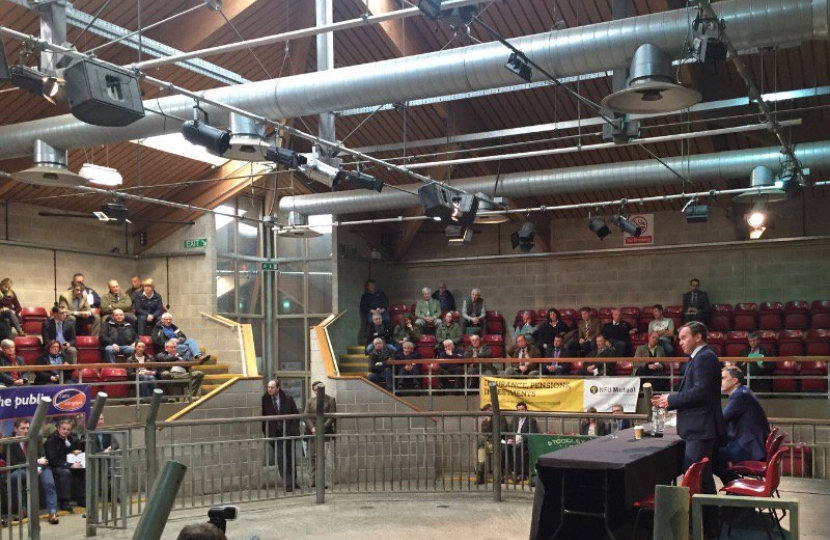 Julian Smith MP welcomed the Farming Minister, George Eustice MP to Skipton Auction Mart for a discussion around the future of the agricultural sector in the UK.

The Minister briefly outlined the work the Government is doing to prepare the agricultural industry ahead of the UK’s withdrawal from the EU and then took questions from the audience on a wide range of topics – covering farming subsidies, environmental schemes, support for upland farmers, farming regulation, and much more.

Julian Smith and George Eustice were then given a tour of the auction mart by its General Manager, Jeremy Eaton and the Chairman of CCM Auctions, Anthony Hewetson. The tour ended with a visit to Craven College’s Auction Mart Campus with Principal Robert Bellfield.

Julian Smith MP said: ‘This morning’s event was a fantastic opportunity for local farmers and others interested in agriculture to voice their concerns and suggestions for the future of this vital industry.

‘People came from as far afield as Buckden and Kirkby Malzeard to hear George speak about how our leaving the EU will affect their livelihoods. The clear message from this morning’s discussion was that DEFRA and the Government as a whole are working to ensure that leaving the EU will be to the benefit of farmers, and the country.’