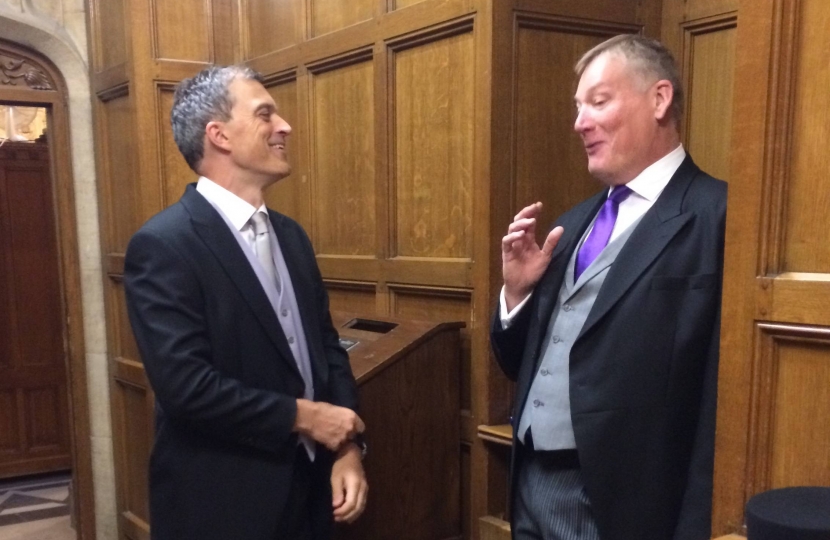 Julian Smith MP officially became Vice-Chamberlain of the Household at an audience with Her Majesty the Queen at Buckingham Palace last week. The job is a historic position that serves as a link between Parliament and the Palace and involves providing a daily private report to the Sovereign on proceedings in the House of Commons. When Her Majesty goes to Westminster for the State Opening of Parliament, Julian Smith MP will be ‘held captive’ at Buckingham Palace.

The position was previously held by neighbouring MP for Keighley and Ikley Kris Hopkins, who held the office for 15 months before being made Parliamentary Under Secretary of State at the Northern Ireland Office in Theresa May’s new Government. Mr Hopkins also attended Buckingham Palace in order to take part in the ceremony of handing over the ‘wand of office’ to Mr Smith.

Kris Hopkins MP said: “It was an immense privilege to serve as Her Majesty’s Vice-Chamberlain and to report on some of the most historic political events we have seen in modern times. I am delighted to be handing the Wand of Office on to my colleague, friend and constituency neighbour Julian Smith. Julian is perfect for the role and I know he will fulfil his responsibilities with characteristic dedication and vigour. I wish him well.”

Julian Smith MP said: “It is an incredible privilege to take on this historic role and particularly to take over from my colleague and friend, Kris Hopkins, a fellow Yorkshire MP.”