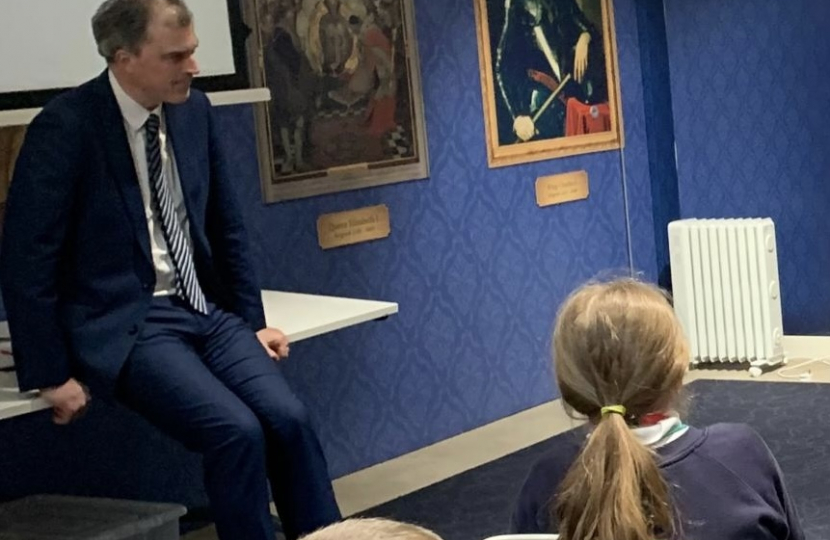 Out and about in Ripon as well as around Skipton this month, Julian had the chance to speak to many local business owners, including those in the hospitality sector who are anticipating busy spring months.

We saw another set of storms and weather warnings. Julian was relieved to hear that the impact of the storm was less severe than predicted in North Yorkshire. Julian has continued to keep in contact with utility providers and local officials, particularly given the delays in restoring energy in some areas following Storm Arwen in the autumn. Discussions have been held with utility providers, including Northern Power Grid, and Julian continues to make representations to Government regarding the preparedness for future weather events to ensure that any power disruptions are minimal and resolved quickly in the future.

Julian met pupils of Masham CE Primary School in Parliament’s Education Centre. The pupils asked Julian numerous questions, including why he decided to become an MP and what it is like to work in Parliament. It is good to see that the Education Centre has now reopened for visits and workshops following a long-period of closure due to the pandemic. It is hoped that more schools will be visiting in the months ahead.

Over the last year, Julian has been in contact with local farmers who have had serious concerns about animal welfare caused by labour shortages, including within abattoirs. This was particularly impacting pig farming and Julian has been pleased to see that Defra has been taking this issue seriously and has, this month, outlined fresh support and initiatives for pig farmers, such as the immediate launch of a UK-wide investigation in unfairness in pig sector supply chains in addition to the pre-existing temporary visas for a number of pork butchers. Julian will continue to monitor the situation closely and represent farmers in Parliament and to the Government.

Separately, Julian has been monitoring the roll out of the Environmental Land Management scheme under the Agriculture Act as we transition away from direct payments towards a new system under environmental land management schemes, including the Sustainable Farming Incentive due to be rolled out this year. Under the Agriculture Act, farmers will receive subsidies for actions that foster environmental benefits – such as improving soil or grassland health – and be able to choose which aspects of the schemes work for them. This new scheme will allow rural economies – such as our own – to thrive as well as protecting the environment and helping to achieve net zero emissions by 2050.

Julian has been holding a number of in person and telephone surgeries over the month across the constituency. Julian continues to hold surgeries on a regular basis. To book an appointment please email or call the office, including the details of the matters you wish to raise.